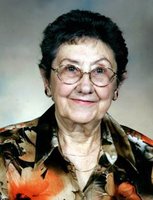 WEBB, Barbara Passed away peacefully in her sleep at the Brantford General Hospital, on Saturday, August 17th, 2019 in her 95th year. Beloved wife of the late Kenneth Webb (2012) for over 65 years. Loving mother of Janet (Raymond) Kinnaird and Darryl (Shannon MacKenzie) Webb. Devoted grandmother of Ryan, Dennis (Kara) Hendershot and Tony Kinnaird and great-grandmother of Ryan, Amber, Sydney, Hailey, Maggie, Ethan and Taryn. Predeceased by her parents Ted and Ivy Sabine and brother Jack Sabine. She will also be dearly missed by brothers Ted (Marg) Sabine and Bruce (Alma) Sabine as well as many other family members and friends. Barb worked at White Farm Equipment Credit Union for over 25 years, and a long time member of the Alexandra Presbyterian Church where she enjoyed signing in the choir. At Barb's request cremation has taken place. Friends will be received at the HILL and ROBINSON FUNERAL HOME and CREMATION CENTRE, 30 Nelson Street, on Friday, August 23rd from 1-2 p.m. A Memorial Service will follow in the Chapel at 2:00 p.m. Donations to a charity of your choice would be greatly appreciated.